Platonic ’desmology’ and the Body of the World Animal (Tim. 30c-34a) 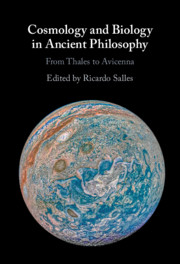 The Platonic cosmogony and zoogony of the Timaeus is distinctive in that the action of the Demiurge and lesser gods is modelled on a wide variety of skills (tekhnai), some obeying mathematical principles, some being modelled on more empirical crafts. Examining in detail how the Demiurge and the lesser gods actually manufacture the world and its inhabitants, this papers argues that there is a deeply coherent and systematic use of the different tekhnai in the Timaeus, grounded on some key principles related to Plato’s philosophical conception of how to bind multiple parts into unified and coherent wholes. This conception is the Platonic ‘desmology’ of my title, a word coined on the Greek noun desmos (meaning ‘bond’) used in the Timaeus to refer to cosmogonical and zoogonical processes. This paper also argues that making sense of how Plato uses desmos and other cognate terms in the Timaeus is key to understand to what extent the cosmo-zoogony of the Timaeus as a whole actually fulfills Socrates’ strong telelogical requirement expressed in the Phaedo, as he criticizes earlier Presocratic accounts : ‘they believe that they will some time discover a stronger and more immortal Atlas to hold everything together more, and they do not believe that the truly good and ‘binding’ (ἀληθῶς τὸ ἀγαθὸν καὶ δέον) binds and holds them together (συνδεῖν καὶ συνέχειν).’ (Phaedo, 99c, trans. Grube).