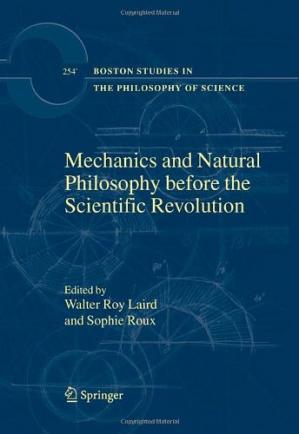 Modern mechanics was forged in the seventeenth century from materials inherited from Antiquity and transformed in the period from the Middle Ages through to the sixteenth century. These materials were transmitted through a number of textual traditions and within several disciplines and practices, including ancient and medieval natural philosophy, statics, the theory and design of machines, and mathematics.

This volume deals with a variety of moments in the history of mechanics when conflicts arose within one textual tradition, between different traditions, or between textual traditions and the wider world of practice. Its purpose is to show how the accommodations sometimes made in the course of these conflicts ultimately contributed to the emergence of modern mechanics.

The first part of the volume is concerned with ancient mechanics and its transformations in the Middle Ages ; the second part with the reappropriation of ancient mechanics and especially with the reception of the Pseudo-Aristotelian Mechanica in the Renaissance ; and the third and final part, with early-modern mechanics in specific social, national, and institutional contexts.

1. Ancient and Medieval Mechanics Mark J. Schiefsky, "Theory and Practice in Heron’s Mechanics" Jean Celeyrette, "Bradwardine’s Rule : A Mathematical Law ?" Edith Dudley Sylla, "The Origin and Fate of Thomas Bradwardine’s De proportionibus velocitatum in motibus in Relation to the History of Mathematics" Jürgen Sarnowsky, "Concepts of Impetus and the History of Mechanics"

2. The Reappropriation and Transformation of Ancient Mechanics Christiane Vilain, "Circular and Rectilinear Motion in the Mechanica and in the Sixteenth Century" Walter Roy Laird, "Nature, Mechanics, and Voluntary Movement in Giuseppe Moletti’s Lectures on the Pseudo-Aristotelian Mechanica" Mario Otto Helbing, "Mechanics and Natural Philosophy in Sixteenth Century Pisa : Cesalpino and Buonamici, Humanist Masters in the Faculty of Arts" Egidio Festa and Sophie Roux, "The Enigma of the Inclined Plane from Heron to Galileo"

3. Mechanics in New Contexts Jochen Büttner, "The Pendulum as a Challenging Object in Early-Modern Period" Victor Navarro-Brontons, "Mechanics in Spain at the end of the Sixteenth Century and the Madrid Academy of Mathematics" Gert Vanpaemel, "Mechanics and Mechanical Philosophy in some Jesuit Mathematical Textbooks of the Early Seventeenth Century"