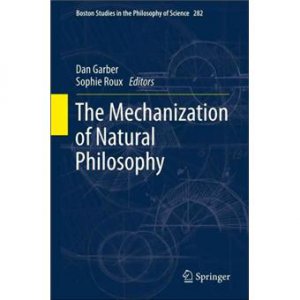 The Mechanization of Natural Philosophy is organised in three parts corresponding to three problems :

PART 2. Mechanical philosophy and theories of matter This part allows us to qualify the thesis according to which the adoption of mechanical philosophy implied the rejection of substantial forms and the adoption of a corpuscular or atomist theory of matter. Navarro presents the atomist conceptions of the Valencian physician Bernat d’Oless Rovera (ca. 1430-1531), his reception in sixteenth-century Spain, in particular in the works of Pereira and Valles. Martin shows that Late-Renaissance Aristotelian meteoreological explanations resorted rarely to formal or final causes, and that Descartes’s Météores were not, in that respect, as innovative as one might think. Gomez offers a detailed presentation of Galileo’s mechanisation of light, in which she argues that neither Galileo nor his disciples renounced physical atomism in favour of a purely mathematical atomism. Palmerino emphasizes that a certain number of authors, notwithstanding their positions on mathematical and physical atomism and without any explicit argument, assume an isomorphism between physical magnitudes (space, time, matter) or between physical phenomena (acceleration /deceleration, rarefaction /condensation).

PART 3. Mechanical philosophy applied This part is devoted to the relationship between mechanical philosophy and various sciences. First papers analyses this relationship in mathematized domains. De Buzon focuses on Beeckman’s and Descartes’ principles of conservation of motion, in order to outline their different conceptions of the relationship between physics and mathematics. Through a detailed account of a manuscript on hydrostatics by James Gregorie (1638-1675), as well as of the scientific context, in which it was copied in 1740, Malet shows that the Edinburgh Enlightement was as mathematical as it was experimental. We also focus on domains where mechanical philosophy failed to provide satisfactory accounts of phenomena. Manning detailed analysis shows the ambiguity and complexities of the Cartesian notion of an organism. From Lambert’s careful analysis of Dionis (1643-1718), we could infer that there is a certain affinity between mechanical philosophy on the one hand, and chirurgical and anatomical practices on the other. Franckowiak examines how the French Chemist Duclos (1598-1685) critized Boyle’s attempt to find in the mechanical philosophy some foundations for chemistry.