Dir. avec D. Antoine-Mahut, Physics and Metaphysics in Descartes and in His Receptions 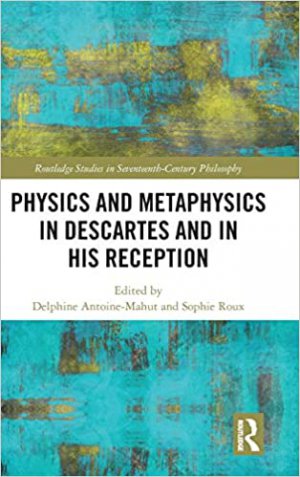 This volume explores the relationship between physics and metaphysics in Descartes’ philosophy. According to the standard account, Descartes modified the objects of metaphysics and physics and inverted the order in which these two disciplines were traditionally studied. This book challenges the standard account in which Descartes prioritizes metaphysics over physics. It does so by taking into consideration the historical reception of Descartes and the ways in which Descartes himself reacted to these receptions in his own lifetime. The book stresses the diversity of these receptions by taking into account not only Cartesianisms but also anti-Cartesianisms, and by showing how they retroactively highlighted different aspects of Descartes’ works and theoretical choices. The historical aspect of the volume is unique in that it not only analyzes different constructions of Descartes that emerged in the 18th, 19th and 20th centuries, but also reflects on how his work was first read by philosophers across Europe. Taken together, the essays in this volume offer a fresh and up-to-date contribution to this important debate in early modern philosophy.

Part. 1. Historiographical traditions Mariafranca Spallanzani, “First Philosophy, Metaphysics and Physics. The Implications of Order in Cartesian and Enlightenment Philosophy” Delphine Antoine-Mahut, “To Replant and Unroot. A Typology of the Cartesian Tree of Knowledge in Nineteenth-Century French Histories of Philosophy” Delphine Bellis, “Between Fake, Unfortunate, and Actual Dependence : the Tumultuous Relationships of Descartes’ Physics and Metaphysics in the First Half of Twentieth Century History and Philosophy of Science” Part. 2. Descartes and his Contemporaries Christoph Lüthy, “Ontology and the Place of Metaphysics : Taurellus, Gorlaeus, Regius and Descartes” Emanuela Scribano, “Strange Bedfellows : Physics and Metaphysics in Descartes” Desmond M. Clarke, Descartes, “A Priori Knowledge, and Metaphysics” Sophie Roux, “A Deflationist Solution to the Problem of Force in Descartes”