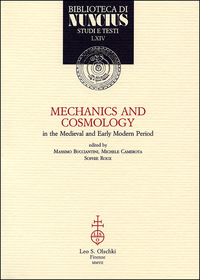 Against the resurgent temptation of simplification, historians of science keep reminding us how long, tortuous, or even capricious, the paths were between the first exposition of heliocentrism in Copernicus’ De revolutionibus orbium coelestium (1543) and the detailed presentation of a celestial mechanics in Isaac Newton’s Principia mathematica (1687). Whereas the division between the sublunary sphere and the superlunary sphere structured the Aristotelian cosmos, the heliocentric cosmology professed in the De Revolutionibus orbium coelestium, insofar as it was taken for more than a mathematical hypothesis, followed by the Tychonian destruction of solid orbs propounded in the De Mundi aetherei recentioribus phaenomis (1588), required the supporters of heliocentrism to construct a new celestial mechanics, able to answer the question “A quo moventur planetae ?”. The answer to this question amounts to the construction of a new mechanics in general, if it is supposed that celestial and terrestrial phenomena are subjected to the same laws of nature. This is not to say that there was one single answer to this question ; on the contrary, the group of moderns who defended heliocentrism produced a rich variety of often contrasting (and sometimes incompatible) proposals about the foundations of a new mechanics.

The purpose of this book is to describe these different proposals, to relate them to other kinds of preoccupations — be they practical or technical, philosophical or theological —, to compare them to medieval views on the same subjects, and to understand how they finally led to the Newtonian synthesis. To achieve all this, specific attention must be devoted to the semantic extensions of the terms “mechanics” and “cosmology”. In the early modern period, the term “mechanics” no longer only refers to technical artifices made by hand (and therefore vile or mean) or to the science of simple machines ; its usage extends to the comparison between natural phenomena and existing or imaginary machines, to the use in natural philosophy of analogies conceived in terms of matter and motion alone, to visible representations of the alleged microscopic causes of phenomena, and last but not least, to the new science of motion and, more generally, to a description of nature in mathematical terms. As far as ambiguity goes, the term “cosmology” is simpler : it refers to the system of the world and, in the period considered here, to the confrontation between Copernican heliocentrism and Ptolemaic geocentrism. A cosmology might, however, imply different levels of conceptualization, from metaphors (e.g. “machina mundi”), to the construction of models (e.g. an astrarium), astronomical observations or metaphysical principles like the principle of simplicity or the principle of plenitude.

The book could have been organized according to the various relationships that existed at the time between the terms “mechanics” and “cosmology”. Instead, it is more classically composed of three parts, corresponding roughly to three historical and conceptual periods. The first part aims at disentangling factors of permanence and factors of transformation from the Middle Ages onwards ; the second part focuses on the early reception of Copernicus in different intellectual contexts ; the essays in the third and last part are devoted to different interactions between cosmology and the new science of motion that was from this time onward called “mechanics”.

1. Permanences and transformations from the Middle Ages and beyond • Michael H. Shank, "Mechanical Thinking in European astronomy (13th-15th centuries)" • Jürgen Sarnowski, "The Defence of the Ptolemaic System in Late Mediaeval Commentaries on Johannes de Sacrobosco’s De Sphaera" • Marcus Popplow, "Setting the world machine in motion : The new meaning of “machina mundi” in the early modern period"

2. Reception of Copernicanism in different intellectual contexts • Giorgio Strano and Giancarlo Truffa, "Tycho Brahe cosmologist : An overview on the genesis, development and fortune of the geo-heliocentric world-system" • Miguel Angel Granada, "The defence of the movement of the Earth in Rothmann, Maestlin and Kepler : From heavenly geometry to celestial physics" • Rienk H. Vermij, "Philips Lansbergen. Heavens and Earth according to the early Dutch Copernicans"

3. Natural Philosophy and the new Science of Mechanics • Carla Rita Palmerino, "The application of fluid mechanics to the study of planetary motion in the 17th century" • Niccolò Guicciardini, "“Mechanica rationalis” and “philosophia naturalis” in the Auctoris Praefatio to Newton’s Principia mathematica" • Domenico Bertoloni Meli, "Experiment in Newton’s Principia : The first edition"